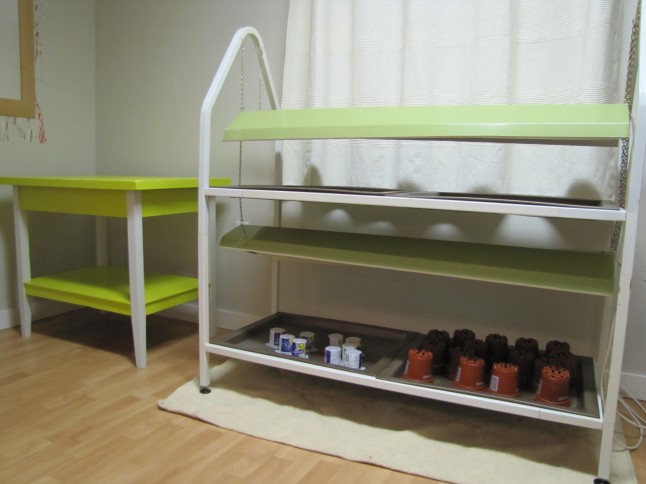 Waiting to Start Seeds for 2011

January is a great month for gardening. Ok, I don’t mean that I’m out in the yard digging down through three feet of snow and amending my soil, but January is the month that I go through my catalogs and choose my seeds for spring.

This year is especially exciting because I plan to start many seeds indoors for the first time in ages. I used to start many of my own bedding plants, herbs and less hardy vegetables such as tomatoes and peppers back in the day, but for some reason I had convinced myself there was really no savings in doing so.

Well, that may be true. I suspect that by the time I buy soil, containers, fertilizer and seeds I’ll be wishing I’d chosen a money-saving trip to the greenhouse. And then there’s the used lighting system which I bought to consider. It’s not flashy and modern, but it has to be factored into the budget.

I’ve decided to be ambitious and try to start thirteen different vegetable varieties, ten different flowers and three herbs indoors over the next few months. If I consider the seeds that I’ll be direct sowing as usual, I’ll have a total of 35 different annuals, plus the potatoes. The chives, thyme, oregano, mint and garlic should have survived the winter and my coriander should self seed but I’ll help it out if it needs some additional seeds sown.

Edmonton has a last frost date of May 7th, but I’ve calculated my dates for sowing with an extra week of safety in mind – that’s to say I’m using May 15th as the last frost date and calculating backwards from there to determine when to start my seeds.

The first seeds to sow will be the peppers – they require two months or more to get ready for moving outdoors. After that I’ll sow my tomatoes (four different types), then eggplant, and so on until they are all cheerfully growing under artificial light.

As far as flowers are concerned, I’ll start petunias early along with aster and viper’s bugloss. Impatiens and dahlia come next followed by coleus and cosmos and some other quick growing annuals.

Sure, plants such as lettuce and cucumber, or morning glory and portulaca can be sown directly outdoors in the spring but I’ve decided to experiment with starting them indoors to see if there is any real advantage. In fact, I’ll direct sow some as soon as the soil is workable and see how they compare.

Others just don’t do well when started indoors. Carrots are a good example – who wants to start a hundred carrot seeds in a tray and prick them out? Carrots, spinach, peas – they should all be directly sown in the garden. Today’s varieties are quick to develop and don’t need the boost of an extra few weeks indoors to get started.

Eggplant and cucumber are two examples of seedling that don’t take well to having their roots disturbed, so I’ll start them in their own 3″ pot. I’ve never found the season to be long enough to grow really good sized onions, so I’ll start candy hybrid onions four to a pot in March and see how they fair after I put them out in May.

Well, there’s lots to look forward to in the next couple of months and I’ll keep posting to my blog as I plant new seeds each week. Here’s my schedule for 2011 – Edmonton zone 3.

The past month from Gardening Grrl

Who’s been talking about Gardening Grrl